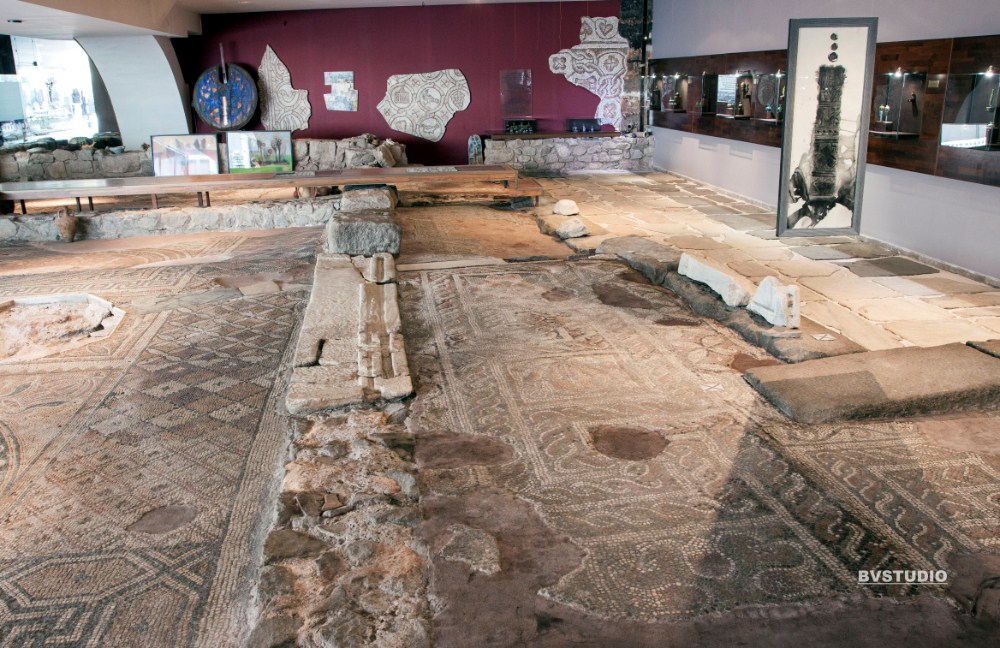 Archeological Underpass - It is a floor decoration of an aristocratic home from the end of the III-rd century. It is known as "Eirene" House because there has been found  an image of a woman signed with that name. Having a peristyle plan, the residential building was a typical representative of the rich city house in Philipopolis. The mosaics of the residential building combine pictorial elements from the east and west Roman provinces. They testify to the existence of a local mosaic work shop.

There is a unique architectural and historic ensemble formed round the fortified gate in the course of many centuries. The item is among the significant symbols of Plovdiv. The gate has been existing in this same place since the very old days. Under the level of the cobble-stone street pavement there are bases laid in Roman times, probably in the second century. Nowadays the place exhibits momentous reconstructions made from 12th to 14th century. Above its outdoor arch the vault clearly displays a building style characterized by the enclosing of every stone within pieces of red brick welded together with white mortar-something typical of the Bulgarian building mastery of the second Bulgarian country period. During the Revival and at the beginning of 20th century the gate was subject to new reconstructions aimed at preventing its destruction. North of the fortified entrance lie the foundations of the old fortified wall whose height also undergoes some changes between the 12th and 14th century. This construction is used for the foundation of the big Revival house, belonging to Kuyumdjioglu, whose imposing body inclines over Nisar Kapiya. In the south the fortified wall sinks into the high church yard of St. St. Konstantin and Elena Church. On the outside of the eastern gate is a small picturesque square enclosed between the church fence walls, the façade of Kuyumdjiev’s house and the main façade of the home of Dimitar Georgiadi 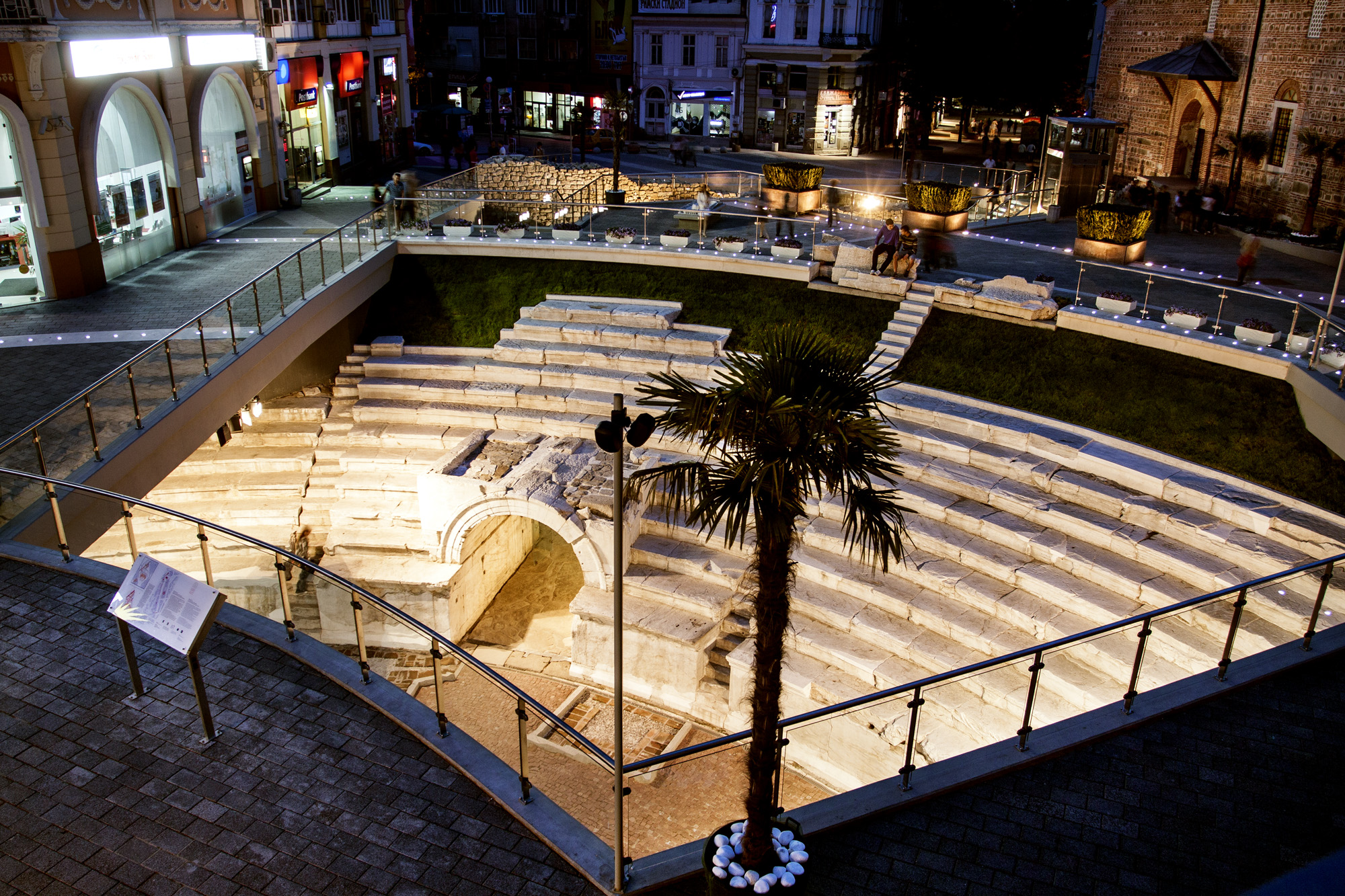 Roman Stadium - It is located on Dzhumaya Square, Plovdiv. It was built in II century on the model of the Delphic Stadium. It is situated in the natural hollow between Taksim Tepe (Taksim Hill) and Sahat Tepe (Sahat Hill). The slopes were used for disposing the audience`s seats. In antiquity the Roman Stadium seated 30 000 people who watched the gladiator battles and sport matches. Today one can see the northern arc of the stadium with 13 rows of seats, the overarched northern entrance and a part of the track.

It was an old Turkish public baths built in XVI century. It was called “Chifte” (English - pair) because there were men`s and women`s rooms. The archaeological research shows that there was a church from the early Middle Age near that place. The famous slab from an altar barrier with pictures of a lion and a lioness was found there. It is treasured in the City Archaeological Museum. The building of the bath is used as an interesting center of contemporary art. 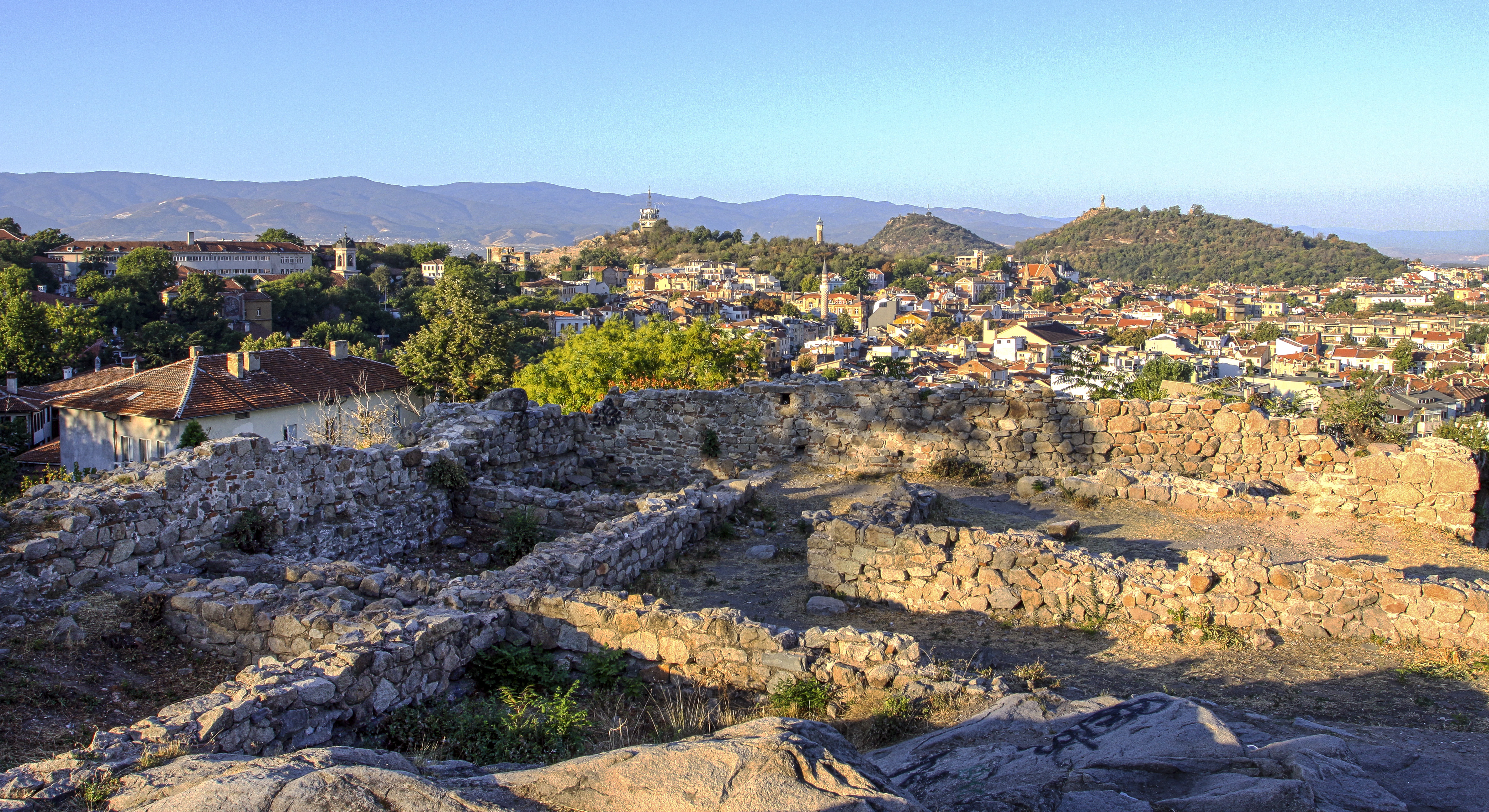 Nebettepe (Nebet Hill) –The remains of the ancient Thracian town, Eumolpias, lie here.  It has grown up as one of the first city centers in south-east Europe. Basic components that are characteristic for the towns of that time have been found – strong fortified walls that have surrounded sanctuaries and an aristocratic palace. The most ancient part of the fortress is very interesting – a stone construction without solder, consisting of roughly-made surface blocks. Nebettepe covers the north part of the Three-hill Massif. There are preserved remakes of the north fortified wall form the time of Justinian the Great (VI century). The wall has had a constructed “poterna” - a small gate with a secret vaulted exit, which had stairs leading to the hill`s foot and the south bank of Maritsa river. The fortified walls of Nebettepe have been also remade in the Middle Age. The reconstructions during the Second Bulgarian State are very obvious. At that time big water depots were discovered. One of them is very impressive – a rectangular water depot with an arched cover and a capacity of 300 000 liters. 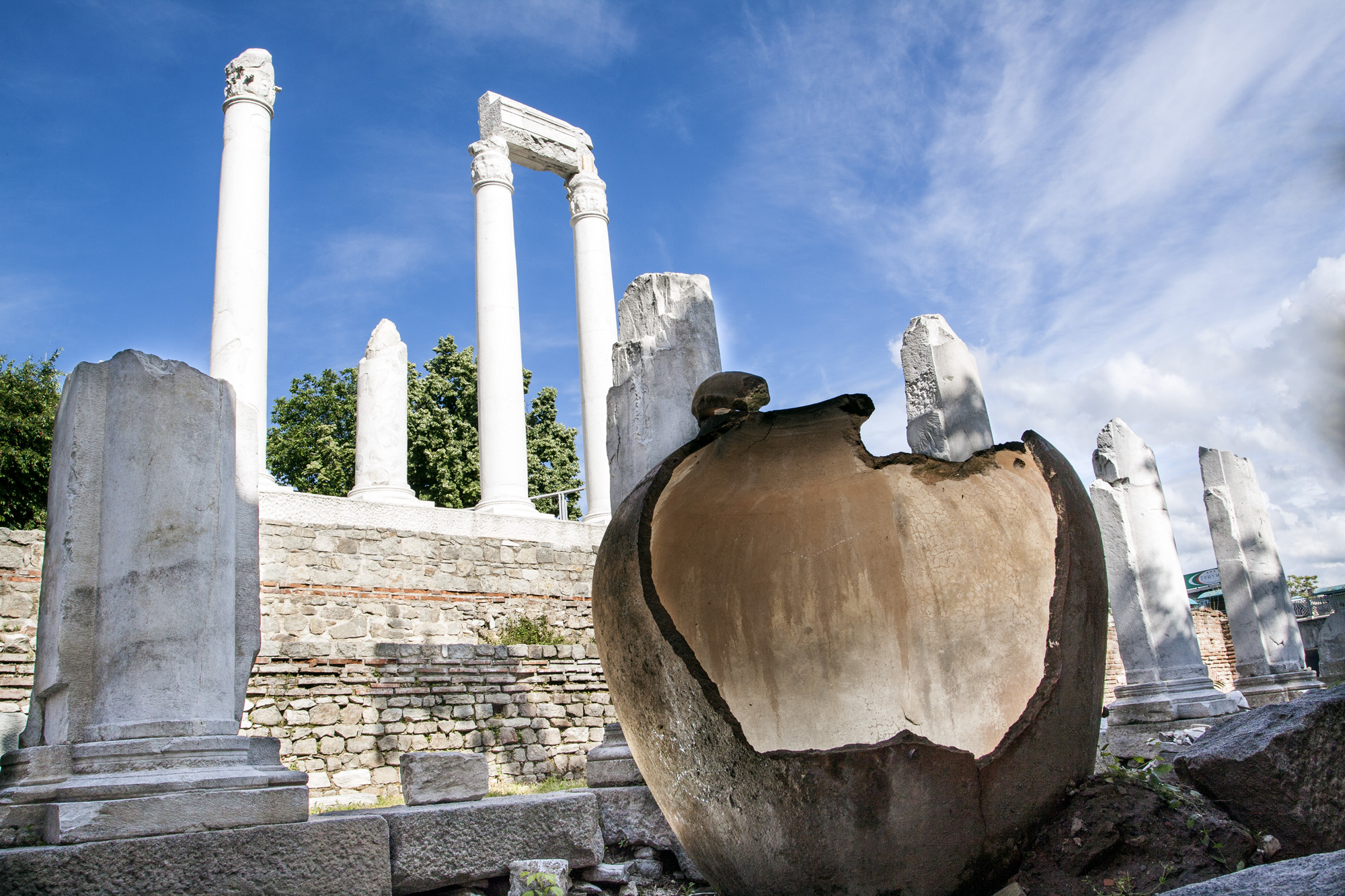 Antique Odeon and Antique Forum - This place is the largest forum complex within the territory of Bulgaria. Here was concentrated the administrative, economical, cultural and religious life of the antique city. It is located on the southern side of the central post office. On the northern side of the forum complex there are public works. The first city Treasury of Moesia and Thrace was situated here. In the north-western corner it is located the Odeon of the Forum Complex. It has 300 - 350 seats. It consists of all elements of a covered theatre building. Among the discoveries are some precious marble fragments of the building, an inscription on the base of an emperor’s statue, a gallery with preserved antique walls, original marble semi-columns and 87 old silver coins that had probably been hidden during the Gothic invasion. Today it is a place of concert shows. 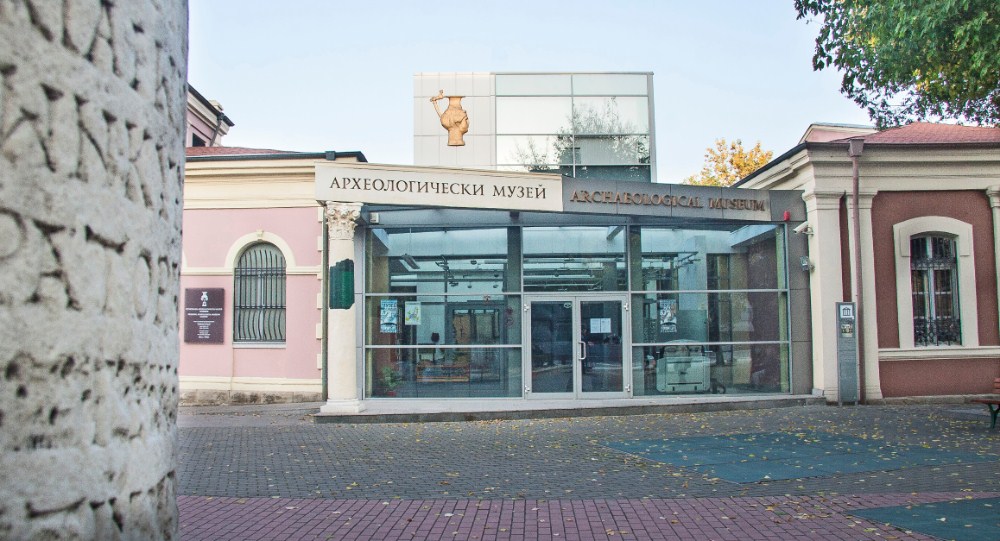 Archaeological Museum – The archaeological treasure of ancient Thrace is kept here. During its existence the museum strengthens its position as a second in size and significance museum with a fund of over 80 000 museum units. There are exponents of national and world importance, such as a rich collection of Neolithic ceramics and religious plastic arts, the ritual fireplace of Nebettepe (Nebet Hill), richly decorated Thracian armour, etc. There is the impressive golden treasure of Panagyurishte from IV-th century B.C., which consists of nine uniquely decorated golden utensils with common weight of 6,164 kg. One can see the spectacular marble frieze with images of deities, embossed decorations from the Antique Stadium and from other remarkable buildings of Philippopolis. 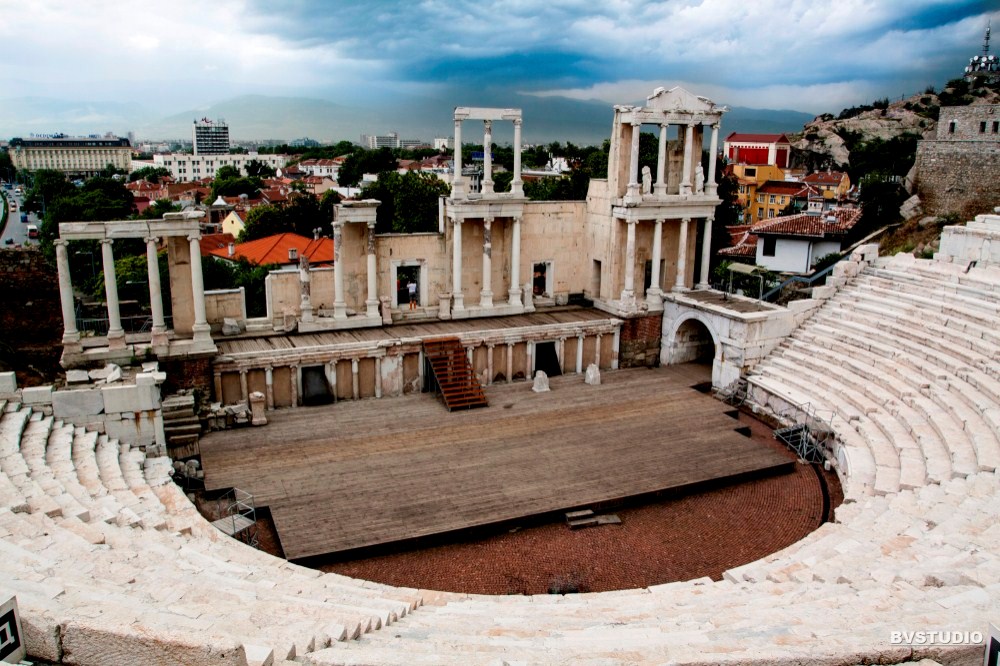 Tsar Ivaylo Str. tel.: +359 32 634 008 Summer working hours /April-October/: 9:00 – 18:00 Winter working hours /November-March/: 9:00 – 17:30 Day for a free-of-charge visit: First Thursday of each month – for students and retirees The Ancient theatre of Philipoppol is one of the best-preserved ancient theatres in the World. It is located on the Southern slope of the Three Hills, in the saddle between Taksim and Dzhambaz tepe. Discovered by archaeologists from Plovdiv and reconstructed in the beginning of the 80s of XX century, the Ancient theatre of Philipoppol is among the most significant findings from the Roman period. Recently found and deciphered inscription on a monumental pedestal reveals that the theatre has been constructed in the 90s of I century A.D., when Philippolol was under the rulership of Titus Flavius Cotis – an heir of a Thracian Royal Dynasty, the high priest of the Tracian province, representative of the Metropolitan Court of Justice and a person in charge of the construction sites. The open-air spectator’s area includes 28 concentric rows of marble seats, surrounding the stage– orchestra, which has the shape of a horseshoe with diameter 26.64 m. Apart from theatre performances, the venue was used for gladiatorial and hunting games, as well as a seat of the General Assembly of the Roman province of Thrace (Tracon koinon). It was in use until the end of IV century and had a capacity of about 6 000 spectators. There used to a lodge for the Emperor and other officials on the second row of seats above the archway. Nowadays, the Ancient theatre is symbolical for Plovdiv and adjusted to the city’s modern cultural life. It is operating as a stage of opera, music and drama. Some of the best annual events are the International Folklore Festival, the Opera Festival "Opera Open", the Rock Festival "Sounds of Ages" and many others. 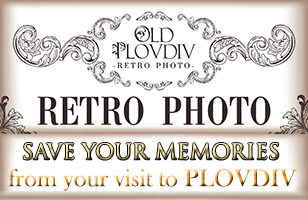